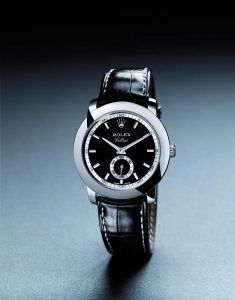 Rolex Cellini watches were named in honor of the 16th century goldsmith, philosopher, and author, Benvenuto Cellini. The company’s intention was undoubtedly to connect in everyone’s mind, Cellini the aristocrat with Cellini, the Rolex watch. The very first Cellini model wristwatch was called the Prince, which was issued in 1928. It quickly became known for its chronometric precision, its rectangular case, and its transparent case back, which showcased the movement. Somewhat surprisingly, The Prince was re-issued in 2005, and again enjoyed considerable popularity.

Cellinium was introduced as the newest member of the Cellini catalogue in 2001, and enjoyed a brief production run. Lasting six years altogether, production of Cellinium was nonetheless remarkable because of the elegance of the watch. The Cellinium still enjoys a prestigious position on the after-market in world watch trading. It also shows up regularly at auction houses around the world, wherever fine watches are sold.

Cellini Cellinium had only a brief run of production, from 2001 through 2006. It was succeeded by a revamped line in the Cellini catalog, which offered three brand new models.

The Rolex Cellini is considered to be the most luxurious and prestigious of the three Rolex catalogs. The Professional and the Perpetual are the other two catalogs, and watches in those catalogs were designed with other objectives. The Cellini line was all about luxury and elegance however, so many of the most expensive Rolex watches are in this catalogue.

Cellinium is one of these luxury watches, and it features a platinum case that instantly gets attention. Other watches in the Cellini catalogue are the Quartz, the Prince, Cellissima, Danaos, Cestello, and Orchid. The Cellinium was made first with reference 5240 and then 5241/6 in the early 2000’s. Then it gave way to a revival of the Cellini series which featured Cellini Time, Cellini Date, and Cellini Dual Date.

The case of Cellinium has a 38 mm diameter, and a thickness of 9 mm, although the Ladies’ version of the watch is slimmer. For the ladies, the case thickness is only 6 mm, to accommodate slimmer wrists. The case back is solid, the dial type is analog, and the hands are luminous.

The case is made of platinum, which of course is a very expensive metal, and has the physical property of being relatively soft. The crystal is made of scratch-resistant sapphire, and the dial color is mother of pearl white or black. This is considered a luxury dress watch, as opposed to the more professional design of some other Rolex watches.

The weight of the Rolex Cellini Cellinium is 150 g for the men’s wristwatch, and 142 g for the ladies’ version. Although its classic, slender profile allows for it to be easily concealed in a long sleeve, concealment is not usually an objective.

The Cellinium is waterproof to 100 m, which means it is very capable of withstanding moisture, even up to extreme conditions. It also is issued with a distinctive alligator leather strap bracelet, which adds to its uniqueness. It has a manual winding mechanism, and a highly scratch-resistant sapphire crystal.

On another note, one characteristic Cellinium has always been famous for is its classical styling. This is in deference to its namesake, Benvenuto Cellini, one of the true geniuses of the Renaissance. The classic round face bears Arabic numerals which are easy to read, and are over-arched by the famous Rolex crown at the top. The tang buckle clasp, the manual wind, and the ‘Cellini’ script all speak to its classic appearance. Many models were sold with the ice-blue dial face, which gave it a stylish and very attractive appearance.

The Cellini Cellinium has a Glacier Blue index with an offset second-hand sub dial, that has a 60-minute display. This is centered in the lower portion of the watch dial in the 6 o’clock position. This makes it very easy to distinguish, since it’s far removed from the Rolex company name at the top.