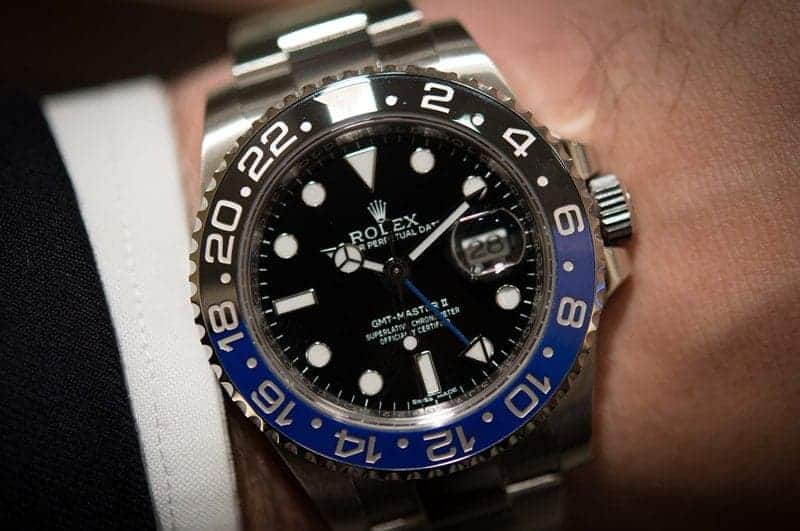 This beautiful wrist watch had its origins in a design that was achieved in collaboration with Pan American Airways. Pan Am wanted to distribute the watches among crew members on long-distance flights, which were growing in popularity. The GMT in the name stands for Greenwich Mean Time, which is now known as Coordinated Universal Time.

The watch was originally issued in stainless steel and was intended to be a professional working watch. Flight crew members could easily change date and time settings on the watch whenever they crossed international time zones. However, luxury versions of the same watch have been issued since then. Some of these even include precious gems and very elaborate designs.

While the Rolex GMT Master was launched in 1954, the GMT Master II was not produced until the 1980’s. The first GMT Master II was issued in 1983 with reference 16760. Because of its unusually thick case, it quickly acquired the nickname of ‘Fat Lady’. As originally introduced, the watch was only available in stainless steel. It had a red/black bezel with extra large crown guards.

The 116710 reference model features a ceramic bezel, an entirely new bracelet, a new movement, and a triplock crown. It also has an anti-reflective Cyclops lens, a green 24-hour hand, and a maxi dial. The Rolex company engraving appears on the inner bezel ring.

Size and Weight of the GMT Master II

The case of the GMT Master II is 40 mm across, which is still sized for convenience. It fits comfortably under a long-sleeve shirt, and of course under the sleeve of a suit coat. The bracelet must be sized for the wearer, and is comprised of Oyster flat 3-piece links.

The watch is made of 904L stainless steel, which is often used for high technology applications. It is a super-alloy which resists corrosion extremely well, and is extremely polishable. The Oyster architecture features a screw-down case back and winding crown. With all the links in place on the watch, it weighs 152 g. With any of the links removed for sizing, it will weigh somewhat less.

The bezel has a blue/black Cerachrom (Rolex’s own version of ceramic) insert. It also features a crystal made of scratch-resistant sapphire, with Cyclops lens. Its bi-directional winding has a Perpetual rotor, and a folding Oysterlock safety clasp with an Easylink comfort extension link.

One of the most distinctive features about the GMT Master II is that it’s waterproof to 100 m. That works out to about 330 feet, where water pressure is a factor. So unless you’re a deep-sea diver, this watch will withstand almost any kind of exposure to moisture. It also has a bi-directional, rotatable 24-hour graduated bezel, with engraved numerals and graduations.

The GMT Master II has a 24-hour fourth hand which is directly linked to the standard 12-hour hand, and displays the same time zone. This was a feature intentionally designed in for those Pan Am crew members of the 1950’s. However, they could set the watch to GMT time zone for requirements of the job. Then they could read a different time zone off the rotatable 24-hour scale bezel. The GMT time zone readings were required for weather forecasts and flight scheduling. The alternative display showed the actual time in the local time zone. 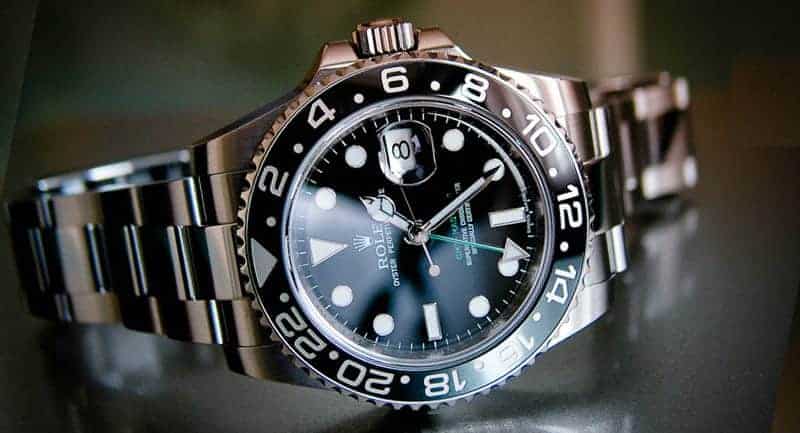